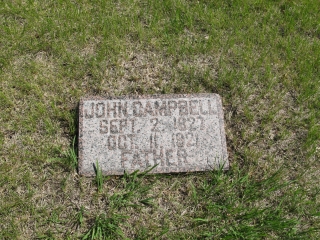 John Campbell was born on 2 September 1831 at Halkirk Parish, Caithness, Scotland, son of Donald Campbell and Isabella Bruce.1,2 John Campbell was baptized on 4 October 1831 at Halkirk Parish, Caithness, Scotland.3 He married Elizabeth Ann Bailey, daughter of Isaac Bailey and Sarah Halliday, circa 1857. John Campbell died on 11 October 1921 at Walhalla, Pembina, North Dakota, USA, at age 90.4 He was buried circa 14 October 1921 at Walhalla, Pembina, North Dakota, USA.
He was found on a passenger list in 1841 at Ontario, Canada.5 He was Proprietor of Campbells Tavern on 1 January 1858 at Campbells Corner, Bentinck, Grey, Ontario, Canada.6 Due to debt issues, horses belonging to Charles McFarane wer siezed and held in the stable of a Walkerton Hotel. McFarlane and Colin and John Cambell took the horses home. A constable was sent to arrest them but he was made to eat the arrest warrant.7